The Rio De Janeiro Carnival is definitely the most known festival around the world. It is held yearly right before Lent and around 2 million people are on the streets every single day during the celebrities. While the first ever festival was held in 1823, now it is stronger as it ever was and since you are reading this article, you are most likely interested in learning some things about it and about what to expect in 2014.

General Things About The History Of The Rio De Janeiro Carnival

Ever since the first festival, the tradition gained more and more enthusiasts. One thing that you may not be aware of is that the carnival parade has the main purpose of having samba schools compete between themselves.

Every single school will choose a theme and will try to perfectly portray it. Schools try to create the best possible lyrics, costumes, floats and aesthetics in order to represent chosen theme while including the best possible music from a bateria (personal drumming band).

While in the past most of the events held were free of charge, nowadays you will want to take some money with you because many of the greatest events in the Rio de Janeiro Carnival are ticket based. The festival is held in Sambadrome and it is a very good idea that you buy your tickets through the official Rio De Janeiro site so that you can gain access to many extra features, including:

Where Is The Rio De Janeiro Carnival Party?

The celebrations are basically held all around Brazil in the week that leads up to Easter but there are 2 really popular destinations: Salvador and Rio De Janeiro. We recommend the second option since it is more spectacular.

The Sambadrome is basically a huge party location in Rio de Janeiro during the carnival. Over 70,000 people cram there and try to find a spot around the 700 meters track.

The Carnival scenes that you see on TV are filmed here. This is where all the extravagant decorations are and when people party as much as they can. The tourists can watch the parades from seating in the stadium or pay a little more and actually participate in the Rio De Janeiro Carnival.

In the event that you cannot actually afford to participate in the Sambadrome celebration, you can always be a part of the free parades that are held all around Rio. Hundreds of mobile sound stages are always surrounded by dancing fans. Try those in Copacabana, Ipanema and Leblon.

The Carnival Outside Of Rio

You might be tempted to participate in the Salvador carnival. This is more inclusive and everything has a clear Caribbean flavor. Costumes are less elaborate but there are over two million people that will participate.

If you decide to go for this option, the two really popular blocos routes are Circuito Avenida and Circuito Barra-Ondina. The first one is four kilometers long and the second one is 6 kilometers long. However, Barra-Ondina goes through an area that is known as being filled with pickpockets and beggars. You have to keep your guard up. Circuito Batatinha is perfect for family groups. 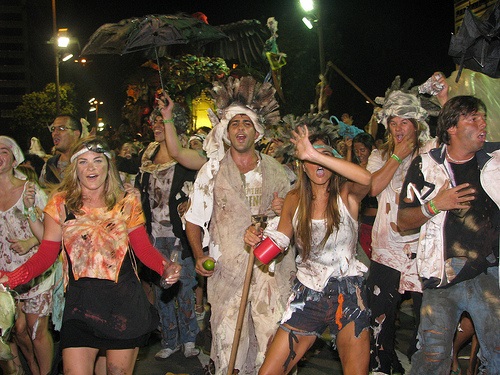 There are various events where you need to buy tickets in advance. This is true for the entire Rio De Janeiro Carnival. As with any such event of this magnitude, the black market is flourishing. There are different stolen or copied abadas. In many situations the tourists end up buying a ticket that is good for the show held the day before or even a ticket to take out dirty laundry.

An official abada will have the date of the ticket embroidered right into the t-shirt you will receive, together with bloco or camarote name.

The camarotes and blocos are expensive but they are great as you can feel tremendous while watching the entire parade in safe environments. The camarotes are wonderful and do include food or drinks.

The Rio De Janeiro Carnival is huge and there are so many festivities that you can be a part of. Tourists end up right in the middle of the parade or watch from afar. No matter the situation, you will surely be surrounded by strangers and friends. Everything looks chaotic but if you are in sync with Carnival rhythm, you will have no problem.

It is important that you organize different meeting spots if you travel with friends because of the fact that it is really easy to get lost.

Remember the fact that there are different people that will become sexually aggressive. It is recommended that women travelers do not wear skirts and do not walk alone. Alcohol and food are sold by street vendors. Prices will always be lower but never accept an opened can and make sure that caipirinhas are poured right in front of you.

It should be added that you need to be a little careful because of high alcohol consumption and lack of an adequate number of public facilities. Some partygoers will use the street when they need to go to the toilet. Be careful about that.

Although some security problems exist, police presence is really strong during the Rio De Janeiro Carnival. There are different lines of officers that are moving around and will help anyone that needs to be helped. However, you can easily imagine how hard it is to move through so many people. If you see a patrol, simply move aside since that makes everything easier for the police.

In the event that a fight starts between partygoers, do not panic. Simply move away but do not run. The police will surely take care of the troublemakers but you do not want to find yourself running with the other people.

It is recommended that you book the shuttle service right when you buy the parade tickets. That is because you get to save money and you also have the certainty that you will have the tickets.

The normal busses will not run during the Rio De Janeiro Carnival. Subway stations are quite far for a regular walk. The taxis can only drop you off before entrances as they cannot enter the Sambodromo. There is a special bus fleet that is exclusively licensed and that you need to use for transportation purposes. Alternatively, you can also go for nomadic approach and just walk but you have to include longer time frames to get from one destination to the next.

The first time visitor to the Rio De Janeiro Carnival should start off with visiting small blocos. They are way less targeted and quieter. You can easily go for a bigger party atmosphere later on but it is quite hard to experience everything since you will feel overwhelmed.

Remember that people always take costuming as something that is really serious in Rio de Janeiro. You should use your imagination to the fullest. In the event that you do not enjoy dressing up, at least try to improvise something colorful! Wear a hat or a mask and remember that the heat is high.

Try to wear lighter clothing. Always try to drink as much water as you need so that you are no dehydrated and eating well is also recommended. Try to wear sneakers that are comfortable since you will most likely walk the entire day. Also, there is the chance that you will hurt yourself as you could step on broken glass.

If you plan to visit the Rio De Janeiro Carnival in 2014, the time to buy tickets is right now. That is due to the fact that there are not many left. Also, you should remember that the best experience when travelling is always the one that you plan ahead.